All the latest Citizen product releases and press stories about our printers can be found here. 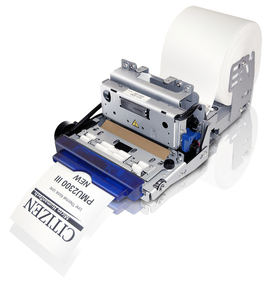 Citizen Systems Europe, a leading manufacturer of high quality POS, label and portable printers, has released its latest PMU-2300 kiosk printer. The new printer combines all the advantages of previous Citizen kiosk machines, including print speeds of 150mm/sec, and has now been enhanced to provide several innovative new functions, offering even more versatility and security for a wider range of kiosk applications.

The new PMU-2300 Version III kiosk printers boast a number of features, including an automatic present and retract function, which operates at a speed of 350mm/sec. This enables the system to be pre-set so that a receipt can either be issued to a customer only after it has already been printed and cut, or while it is being printed. The first setting is ideal for unsupervised locations as it prevents customers pulling on receipts before they are ready to be issued, which can create problems with paper jams or encourage vandalism. In addition, the receipt presenter can be set so that after a defined period of time it automatically withdraws receipts that have been left behind, helping to protect sensitive customer information.

Another new feature of the latest PMU-2300 is a mounting bezel that makes it quick and simple for system builders to integrate the printer into kiosk terminals. The new printer also incorporates four monochromatic white LEDs, which indicate when a receipt is about to be printed, has the option of two paper roll holder, for rolls of up to 102 and 203 mm in diameter, and is built to operate at temperatures between -10 and +60ºC. Additionally, the PMU-2300 uses the same software drivers as previous Citizen models, enabling system integrators easily to upgrade older units.